Bodybuilding Is For Women Too

If I told you I was a bodybuilder, what image would you have in your mind? Maybe you’d picture a huge dude like The Rock or Arnold Schwarzenegger? Or maybe those guys like Hanz und Franz from the Saturday Night Live sketches from the 80s?

What if I told you that bodybuilding is for women too, and they have a division called “Bikini” where the goal is to look sexy and strong and feminine? Sound interesting? Now what if I told you that the Bikini division isn’t just for college gals, but also for moms like me who just turned 45? Not exactly what you were expecting, huh?

Bodybuilding is great for so many reasons, but especially since it’s one of those sports that encourages women (and men) of a certain age to keep challenging themselves and throw out those old notions that 40 is the beginning of the end or middle age and that your health won’t get better.

I recently returned from the Arnold Sports Festival, one of the largest fitness competitions in the world with over 22,000 athletes competing in over 80 sports. The biggest part of the festival is the bodybuilding competition with over 800 athletes at the amateur and professional levels posing in bodybuilding, figure, physique, fitness and bikini competitions, and I was one of the women strutting my stuff in 5” heels and a sparkly bikini.

Don’t let the glamour fool you though, competition prep is one of the most intense training regiments you will ever go through, and I’m speaking as a woman who ran three marathons and a Spartan Super mud run. Typical prep time starts 12 weeks before the competition, but for a big international show like the Arnold many people will train for a solid year to get ready.

The workouts are comprised of strength training and cardio, and most competitors I know will do at least two workouts per day (morning and early evening). And let me tell you, we lift some weight. A leg day workout might include 400 barbell squats, 180 Smith Machine lunges and 90 bench bridges as the warm-up.

The toughest part (for me, at least) is following the very strict diet, which includes protein, complex carbohydrates, healthy fats and tons of vegetables. And water- lots and lots of water. Like a gallon of water per day. It’s insanely hardcore, but if you can do it your prize will be that you will be in the best shape of your life. 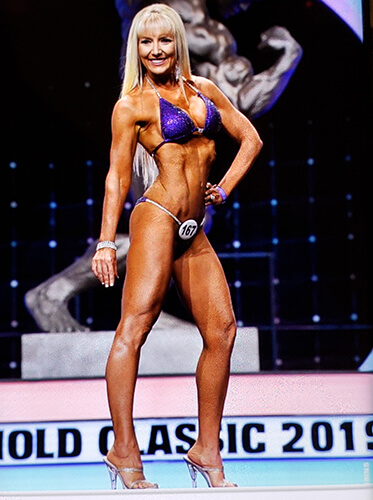 The quirkiest part of bodybuilding is the posing. There are actual poses that you have to learn and most people will hire a posing coach or take posing classes so you don’t look too awkward. If you have a background in cheerleading or dance you are at an advantage. If you are like me (I got no game) you will have to practice walking around the house in your heels and hope you don’t trip over your own feet and injure the dog.

Remember how I said posing was the quirkiest part? I think I should amend that honor for the spray on tan. Want to know why we do this? Because under the stage lights all our muscle tone gets washed out, so we make our skin as dark as possible to show more definition.

On the day of the show everyone gets their number and they divide you into groups based on height. If you do the Masters Bikini that means you will only compete with women 35 and older. If you do the Open Bikini division you will compete against women of all ages between 20 and whoever the oldest woman is. You go onstage in a group and stand in a V shape on the stage. When they call your number you give your individual posing routine, which lasts all of 10 seconds. Then they call out groups of five women to do comparisons, where you stand in your individual poses and the judges score everyone and they give out the trophies for the top 5 winners at the end of the show.

That’s what a bikini competition is; now here’s why I do it. It started for me as a last-ditch effort to lose weight because I was borderline obese and my life was a mess. In doing such an intense training I managed to learn about nutrition, strength-training and self-discipline. I lost the weight, the excuses and my insecurities and won back myself.

Ever since that first competition I’ve stuck with the sport to give me a reason to choose broccoli over cookies and a chance to bust out of my daily routine as a mom in Pflugerville, Texas to become a sassy bikini competitor alongside women half my age.

I’ve won 1st place and I’ve come in dead last and everything in between, and I still keep competing. Know why? Because as long as I’m improving show to show and keep living a healthy lifestyle, I’ve won.

And so can you, if you give bodybuilding a try. If I can do it, so can you!

Shop now and SAVE on Bowflex SelectTech Dumbbells!